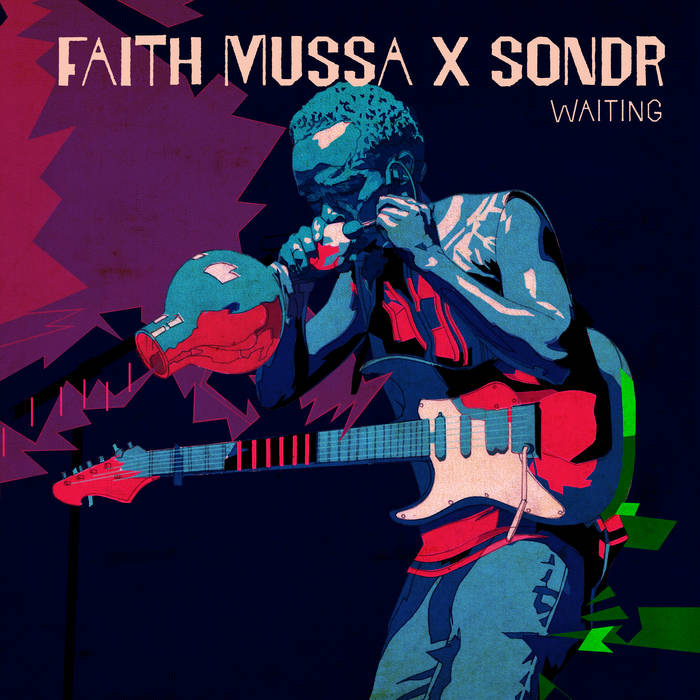 Sometimes collaborations just work so beautifully. Here is a perfect example. Take Malawian one man band Faith Mussa, who is a bona fide African superstar able to do it all, with two of dance and pop music’s biggest rising producers known as SONDR, and the combination is the purest perfect dance hit we’ve all been ‘Waiting’ for.

Faith Mussa is no stranger to western culture having worked with Rudimental and performing his unique one man band show which features an abundance of ancient tribal instruments through to loop pedals and the latest tech gadgetry culminating into a wondrous tapestry of old meets new which has amazed audiences from Glastonbury to California and beyond.

His last album ‘Kalilima’ was recorded in a bell tent, an orphanage, a horse ranch and a village in Mchinji-Malawi.

SONDR, on the other hand are a pioneering London based duo of songwriters and producers who are behind some of the biggest hits of the new millenium’s roaring ‘20s working with Chainsmokers, Lana Del Ray, Steve Aoki, Ella Eyre & Conor Maynard, Lenny Kravitz and many more. After their remix work of an Ed Sheeran remix was voted by Billboard as one of his best remixes in 2018 Sondr have been commanding airwaves and streaming platforms through their incredible work with chart topping international artists.

Combining now on ‘Waiting’ with Beating Heart label and Faith Mussa, their future smashing anthems are blended to perfection with the richness of African culture, instrumentation, language and sound to deliver a truly uplifting dance spiritual for our times.

Musically, he represents the multifaceted nature of being a one-man band, playing a variety of instruments including the traditional badza, manjerenjeza and mbalule. “I am a fusionist,” he says. “I love to fuse modern musical sounds with my Malawian traditional vibes. My music is rich in African traditional and modern sounds.”

Faith Mussa explains, “What I enjoyed the most was the process of blending traditional vibes with modern musical genres.”

There’s also an added element of connecting faraway places due to the bilingual nature of ‘Waiting’, which is sung in both English and Chichewa. He goes on, “I realised that if my music is going to be global then people more than just Malawians should relate with it. I have collaborated with a lot of talented musicians in my musical journey, but my collaboration with Beating Heart really brought out something exciting. My writing process has really changed after meeting them. Without losing seriousness and quality, I had to write quickly, think fast, and adapt quickly.”

As an artist who has worked with various charities such as Oxfam and UNICEF, and written songs about children’s rights, this song acts as an extension of Faith’s world-connecting approach both musically and personally.

Faith confides, “It’s a song about coexistence. Love and peace. It’s a song that says: it doesn’t matter where you come from, or look like, everyone belongs everywhere. We need to learn to love each other and treat each other well regardless of borders or differences.”